Q. A lot of people are talking about normalization policy, which has recently spooked China A Shares market. In the U.S., treasury bond yields have shot up and it naturally prompted stock market correction, but it does not seem to be the case in China. Do you see any other signs implying tightening trends kicking in in China?

A: Equity and sovereign debt markets have responded very differently to PBoC action this year. For more details on PBoC tightening, please have a look at our February webinar.  In brief, the Bank has been tightening policy since May last year. Their primary policy tool is open market operations, and they switched stance in May, pulling interbank rates mostly higher since then, apart from some adjustment in Q4. That tightening helped guide sovereign yields up more steadily, whereas markets have just caught up with those prospects in the US. In contrast, the steady tightening through H2 held back the main equity indices, at least compared with gains elsewhere in the world.

The PBoC, however, became concerned about equity bubbles and speculation this year, despite its early tightening. The withdrawal of funds through OMOs caused a spike in interbank market rates, sending the message that rates are low to support the real economy, not to finance speculation. Sovereign yields didn’t really budge much, either when the Bank sent this message, or when yields spiked elsewhere, presumably partly because the Bank had already been guiding yields higher through last year so there was less to be surprised about. But the reaction in equity markets was quite different. Officials also have been quite vocal about equity market bubbles. So market players seem to have realised that they are fighting the central bank, and decided that’s not a position they want to take. At the same time, last year’s tightening is now feeding through to liquidity conditions, pulling them tighter. We think M1 growth probably peaked in January, at disappointing rates compared with the history; please see our March 11 Monitor for more on this. That tightening of monetary conditions is a drag on equity markets, and the property market too.

It’s not all bad news. The coming blow-out in PPI inflation means that margins in the industrial complex are set to reflate, having been at their tightest point around the turn of the year. The same cannot be said of the services sector, where output price inflation is likely to remain depressed until the travel sector returns to some semblance of normality; there’s more on that in the March 11 Monitor and webinar as well. And wages appear to have rebounded strongly after the tumble in the initial stages of the pandemic.

Going forward, we expect the PBoC to remain ahead of the curve compared with other central banks, raising the interbank corridor in the second half, virus permitting.

The chart shows that the PBoC began guiding rates and sovereign yields higher in May last year. 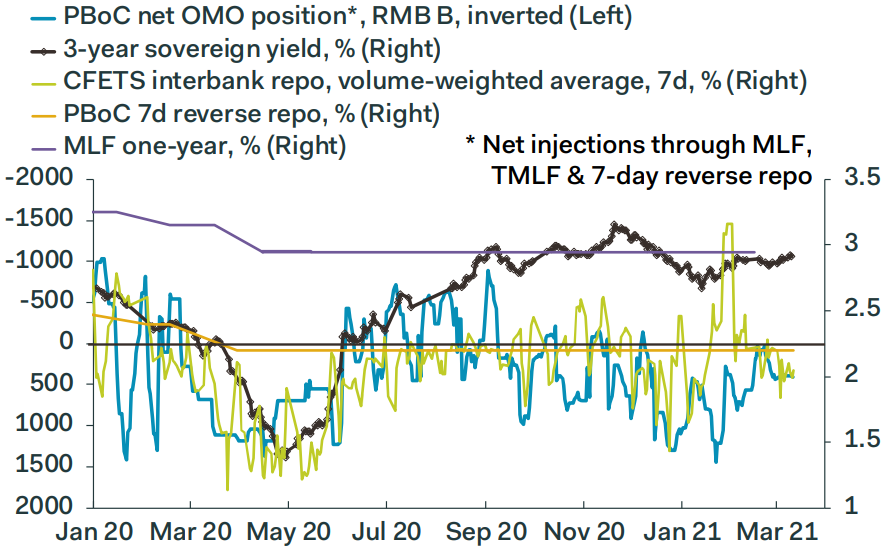 China+ Webinar March 2022: The Best Laid Schemes O'Mice An' Men...What Next For China And The World After The NPC?

U.K. Webinar December 2021: Will Monetary Policy be Nimbler in this Tightening Cycle? Re-examining the "Transmission Mechanism".