Q. What will the ECB do to its QE programs in the second half of the year?

A: The ECB’s communication around its emergency QE efforts—PEPP—has left investors scratching their heads in the past few months. In March, the central bank promised to “significantly” increase the pace of PEPP purchases through Q2, though initially it seemed as the ECB wasn’t too bothered following through on that pledge. Ms. Lagarde stretched the fabric of reality last month by claiming that the ECB had already bumped the pace of QE, though in fairness it now seems as if the pace is picking up, belatedly, as the chart below shows. This, however, comes just in time for markets now having to contemplate whether the ECB will soon be mulling a slowdown in PEPP purchases. Vice-President Luis de Guindos said last week that the governing council "may start to think about phasing out the emergency mode on the monetary policy side" over the summer if 70% of Europe's population is vaccinated, reaching the milestone set by the EU, and the economy reopens and recovers. The good news is that these two conditions might very well be met, in effect signalling that Europe is finally beating the virus. The bad news is that it implies that the will ECB making what can only be described as a u-turn by June.

In a way, it makes perfect sense for the central bank to gradually pull back emergency policy tools as the economy reopens, a decision that was always coming as part of the flexibility retained within the PEPP program. That said, any decision on a reduction in the pace of PEPP has to be made with an eye to the rip-roaring rally in financial assets since the lows in Q2 last year. Markets have bought the rumour of a recovery, and if policy stimulus is reduced too fast for their liking, they'll almost inevitably throw a tantrum. Our hunch then is that a swoon in risk assets is coming—lower equity prices and wider spreads between core and peripheral bond yields—and that this moment will arrive in response to the ECB’s discussion on a slowdown in Q2. The good news is that the central bank won’t allow financial conditions to tighten to far, too fast, pointing to an overall solid pace of QE through H2, probably around €60-to-70B, including the APP. 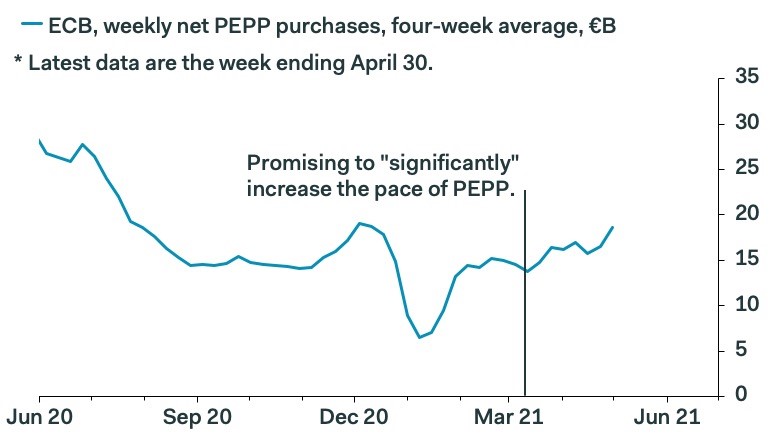 Keywords for: Question of the Week, WC 3rd May April 2021