Q. Is U.S. healthcare inflation likely to keep rising, even as regulatory boosts to prices drop out of the calculation over the next year?

A: It is true that January's 3.75% jump in payments to physicians for Medicare work will not be repeated next year, and other legislative factors also will exert a degree of downward pressure on U.S. healthcare inflation over the next year or so.  But two other big factors will work in the opposite direction.  First, healthcare inflation in the medium-term is driven by the rate of growth of labor costs, which account for about 60% of total costs. The influence of labor costs can be masked in the short term by structural changes (the shift to HMOs in the 90s, and Obamacare in recent years) but ultimately there’s no escaping labor costs. The labor market landscape now is vastly different to the environment after the crash of 2008, and we expect significantly faster wage increases than back then. The seven years after the crash saw a steady slowing in healthcare inflation, partly due to constrained wage growth and partly due to Obamacare, but that’s over.

Second, hospital margins were crushed by Covid because the volume of elective procedures (non-urgent medical work and cosmetic work) plunged - non-urgent heart surgery dropped 65%, for example - creating a huge backlog. The way to manage a backlog is via pricing, so we're expecting to see a concerted attempt to rebuild margins, on top of the impact of faster labor costs growth.  All told, we expect the five-year rising trend in PCE healthcare inflation - nearly a fifth of the whole core index - to keep grinding upwards. 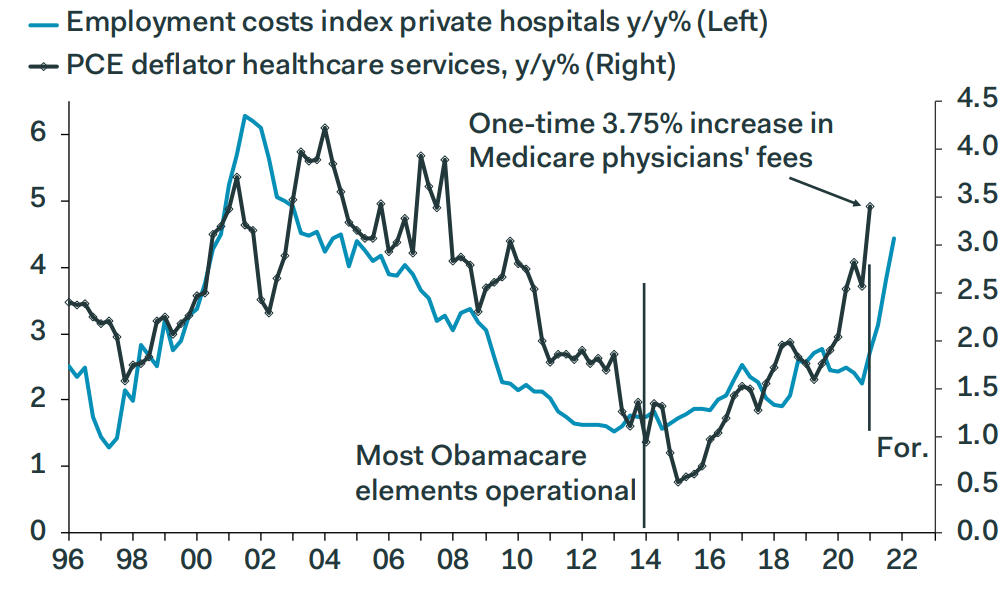