Below is a list of our U.K. Publications for the last 6 months. If you are looking for reports older than 6 months please email info@pantheonmacro.com, or contact your account rep

Please use the filters on the right to search for a specific date or topic.

In one line: Omicron and earlier-than-usual Christmas shopping are weighing on sales.

The CBI’s reported sales balance plunged to +8 in December, from +39 in November, well below the consensus, +25.

The sharp drop in the net balance of retailers reporting that sales were higher than a year ago suggests that annual growth in retail sales has slowed to a crawl. The reported sales balance was at its lowest level since March. And the sales-for-the-time-of-year balance—which has a better relationship with the official data—fell to -2 in December, from +35 in November.  Admittedly, other measures of consumers’ spending have been more upbeat in December. The Bank of England’s CHAPS data, for instance, rose by 12% in the first nine days of the month, compared to November’s average level. Note, however, that the series is not seasonally adjusted. Given that retail sales usually are 15% higher in December than in November, total spending might not be rising at all.

Nonetheless, we think that retail sales should be relatively immune to the impact of the Omicron variant, particularly if consumers shift spending away from services venues. After all, employment growth has remained strong in the wake of the withdrawal of the furlough scheme. And households have amassed excess savings equal to nearly 9% of GDP, which they can draw on to finance expenditure over the next year, if they become more confident again. We doubt, however, that households will go on a spending spree, either. GfK’s measure of consumer confidence edged down to -15 in December, from -14 in November, well below its long-run average, -9.  And as well as the emergence of the Omicron variant, households are facing mounting pressure on their real incomes from high CPI inflation. Real incomes will be hit by the increase in National Insurance contributions in April and by soaring CPI inflation, which looks set to increase to around 6% on the back of a huge increase in energy prices. Growth in employment also will slow as businesses too are hit by higher NICs and struggle to utilise the staff they took back from furlough in October.  On balance, we expect retail sales in H1 next year merely to match Q4’s level.

The chart shows that annual growth in retail sales probably slowed to a crawl in December as consumers already had done a lot of their Christmas shopping in October and November, and the Omicron variant persuaded people to retreat to their homes. 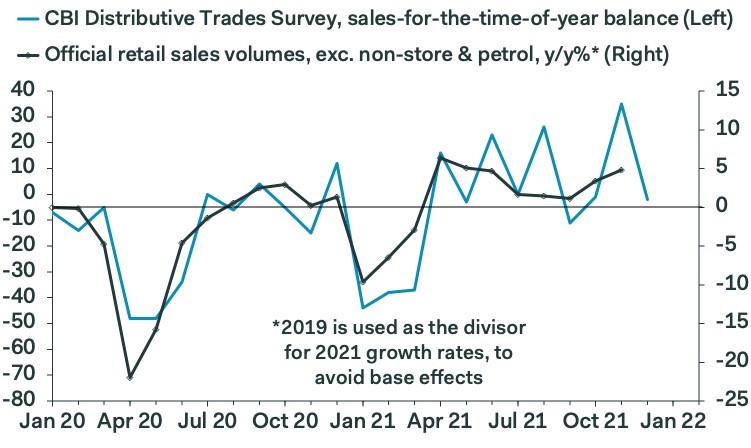 Most members, however, thought the decision was "finely balanced" and see a "modest" tightening ahead.

Omicron won't just have short-term effects if the MPC hikes again and pushes firms over the edge.

November's 5.1% CPI inflation rate was 0.6pp above the forecast made by the MPC only last month...

...But high inflation is due to surging energy and goods prices; underlying services inflation remains subdued.

We expect the headline rate to peak at 6.0% in April, but then to fall sharply, slipping below-target in 2023.

The unemployment rate continued to fall in October, despite the end of the furlough scheme.
Some full-time workers have become part-timers post-furlough, but they don't seem to want more hours.
Wage growth, however, slowed to a below-inflation rate in October; the real wage squeeze will get worse.

Trade-weighted sterling has fallen by about 2% since late October; bets on a further drop have intensified.
The U.K. economy is more Covid sensitive than most; the downside risk to rate expectations is greater.
Investors next year increasingly will price-in the risks of a messy outcome to the next general election.

23 Nov 2021 MPC Members are Keeping their Options Open, No Matter the Data

By the autumn, vaccination rates no longer will be higher in the U.K. than other advanced economies.
The chances of U.S. and U.K. rates rising in lockstep are remote; the U.S. recovery is far more advanced.
U.K. political risks are low now, but next year investors will start to weigh the risks from the 2024 election.

Filter by Date
(6 months only; older publications available on request)